Continuing to build fatness on my belly before Vegas this weekend! WOOT! Since being at home, I have not been afraid to make bread. My dad is obsessed with carbs, especially bread like me, so he gives me the courage to make bread. Bread is always a scary thing to make – it usually takes bakers awhile to get to this level. But I tell you, since making about 4 batches of bread in the span of a week, I am no longer afraid. Let me give you the courage to make a loaf! I am trying to venture into different forms of bread – I have made pretzel bread before, brioche, focaccia, and have failed many times at pizza dough. I plan to tackle that next. But anyway, I was looking at my cookbooks to freshen up my tastes, and I came across a recipe for a Chinese Sausage Focaccia bread in my beloved Momofuku NYC cookbook by Christina Tosi. I was uber excited to make it as I love Chinese sausages. I grew up eating those fine, salty things and how awesome would it be to combine it with my love of bread! 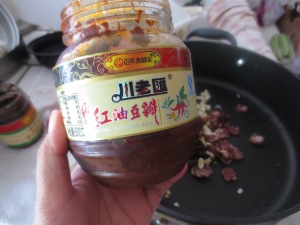 The cookbook features “Mother Dough” – the bread dough base that the head baker at Momofuku uses for most of her best selling carb items (think Bagel Bombs, croissants, focaccia, cinnamon bun, etc). Hard to believe that one dough takes care of them all, but it says right in the cookbook that it does! I can’t wait to tackle the next carb projects in her book using this loving dough. I hope you will join me too!

1/2 tbsp salt (I found the sauce used in this bread (see below) to be super salty, so next time, I plan to use even less salt, maybe about 1/4 tbsp salt)

To Make the Mother Dough

1. Stir flour, salt, and yeast in the bowl of your stand mixer. I don’t even proof my yeast (like testing it with water) – I just sprinkle the active yeast into the flour/salt mixture and mix it dry. 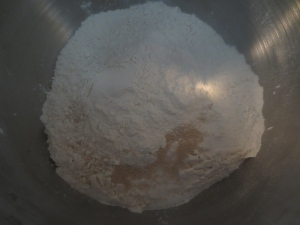 2. Use the dough hook and mix the dry ingredients together.

3. Add the water, and continue mixing it with your dough hook by hand just to combine it a little.

4. Attach dough hook and bowl to stand mixer. Mix on low speed for 3 minutes. Scrape down the sides of the bowl. It will look like a shaggy mix.

5. Mix on low speed for additional 4 minutes. The dough should look like a wet ball.

7. Cover the dough with plastic wrap, and place a towel over it. Let the dough rise for about 45 minutes, until doubled.

To Make the Chinese Sausage Filling

1. While the dough is rising, cut the sausages into small pieces.

2. Place in a pan with the garlic, oil, and sauce. Let the sausages simmer in the sauce and oil on medium-low heat for about 15 min.

3. Drain the oil into a separate bowl to be used for later. Put the sausages in another. 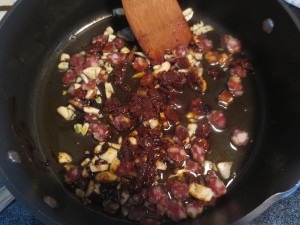 4. Once the dough is doubled, punch the dough so it collapses. Like actually using your fist.

5. Using your silicon spatula, scoop out the dough onto a sheet pan (quarter or half). I used a silicon mat so the dough wouldn’t be so sticky. If you don’t have a silicon mat, then spray your baking pans with oil.

6. Pat/knead the dough a little bit with the spatula, so you dont get the mess on your hands.

7. Spread the dough across your pan using your spatula.

8. Visualize dividing your dough lengthwise in three ways. Spread half of the sausage mix into the center of the dough.

9. Fold the right third of the dough over it (like folding a letter).

10. Spread the other half of the sausage mix onto the dough. Fold the left third of the dough over the mixture.

11. Cover the dough loosely with plastic. Let it rise again for another 45 minutes.

13. Using your finger, poke a few holes into the bread. Brush some of the spicy oil you have leftover onto it. 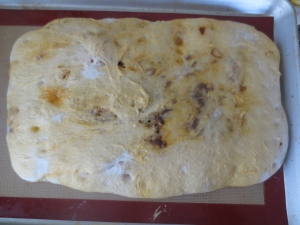 15. Let the bread cool to room temperature and serve! 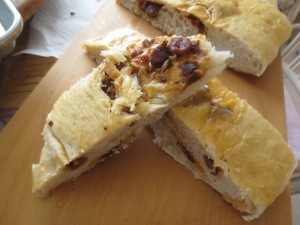