I made these for this year’s Superbowl party and they were such a huge hit! Friends gobbled it up so quickly because they were seriously so so good. I normally am a HUGE pretzel fan- I loveeee soft pretzels dipped in nacho cheese at ball games, Costco, or amusement parks. I love the doughy and salty taste to it. It originated in Europe, most likely in Germany because “pretzel” comes from the German word “brezel.” Its defined by its signature twisted loop shape and comes in hard and soft kinds. The loop is said to also be a functional design for easy hanging for sale. It has particular significance in the Catholic Church according to wiki because its associated with Lent and Easter because the faithful can’t eat such things like eggs, milk, dairy, or lard during Lent. Boiling the pretzel dough in baking soda water helps make it that brown color.

Because they were such a huge hit, when 4th of July came along and I was to go to a picnic at Dolores Park, I figured one of the best finger foods and also filling would be these damn good pretzel dogs. I made the dough in the morning for it to rise by noon. Just as I expected, the hot dogs were a huge hit, along with all the other delicious food at the picnic. Everyone really went all out!

Pretzels are best eaten the day of they are made, so grab a friend, a beer, and nom on these delicious homemade pretzel dogs!

1. In electric stand mixer with dough hook, mix the warm water, sugar, and yeast together. Wait 5 minutes until foamy. If it isn’t foamy, then you need to restart the yeast.

2. Add butter, flour, and salt to the yeast mixture. Mix on low speed until well combined.
3. Mix at medium (6) speed for about 4 minutes. The dough should go from shaggy to smooth dough, pulling away from the sides of the bowl.

4. Take dough out. Knead it with your own hands a few times until its a pretty good ball.
5. Oil a mixing bowl. Place dough in it. Brush some oil on the dough.
6. Place towel over bowl and let it rise in a warm location. (Pro tip: warm the oven on low and then turn it off so its a tad bit warm inside the oven. Place the dough in there)
7. Let rise for an hour.
8. When its doubled in size, take dough out.

9. Cut hot dogs in half. Brown them a little bit on a pan. 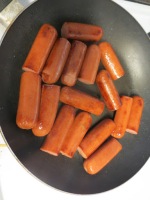 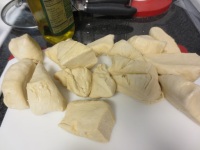 12. Stretch dough like a worm until its about 1 foot long. 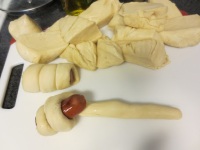 13. Wrap dough around hot dog. Make sure the ends stick so it doesnt unravel!

14. Boil the wrapped hotdogs individually for 30 seconds in the boiling baking soda and water.

15. Place on baking sheet. Brush with egg. Salt and pepper it.

17. Serve with mustard and ketchup! Nacho cheese if you have any! 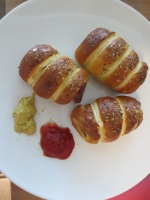