You might be wondering why on earth I would use/buy habaneros. They are so friggin spicy! The story goes back to one of my fellow intern coworkers. He has no tastebuds. Zero. Well, so we thought. This guy basically would eat 2 dollops of wasabi on top of his sushi, slather sriracha all over his rice, pour any type of hot sauce over his food when available. Its nuts! You have to see it to believe it. But anyway, so my boss told him about Smokeaters Hellfire Challenge in San Jose and how she watched the guy from Man vs. Food do the challenge and cry at the end. The cooks dump 6 ounces, SIX OUNCES! of habanero powder onto those damn wings. Well we were all very intrigued, especially my 0 tastebuds coworker. We watched the video at work and sure enough the guy cried at the end. So my coworker had a month to think about it before he actually did it. The week before the day of the challenge, he read tips, practiced eating whole peppers, starting at the lower end of the Scoville scale and working his way up to habaneros. (He did actually eat 3 Ghost peppers before in his college days, which is 100x more spicy than habaneros.) But obviously fresh ones are much less ‘spicy’ than powder so he knew what he was going into. On the day of, he ate a few habaneros and gave the rest to me. That is how I have come to have habaneros in my kitchen.

The challenge: We get to Smokeaters. He signs a waiver, and drinks some milk, has some tums, to line his stomach. Then they sit him down, serves him the wings. All 12 of them (him thinking it was 10)! It REEKS. Smells soooo bad! Looks like poop! Dry as hell! He starts and is able to proudly get through 4!!!! He ended up sweating and shedding tears, but it was all so worth it. He said it wasn’t even because it was spicy- that it just tasted soooo bad and was sooo dry (chicken and sauce) that it was hard to swallow because no liquids are allowed to help wash it down. He could have continued, but whats the point if he knew he could probably get through 2 more, but not 8 to finish. Anyway, great effort and it was sure a spectacle. Sent it to the office and everyone applauded. YAY! I am just glad he lasted longer than this guy the cashier told us about: ate 1 wing, barfed in the bathroom for the next hour.

Here is an example of how HOT habaneros are on the Scoville scale compared to others:

I used 1 habanero pepper for my corn quesadillas and I was definitely feelin the heat already!

1. Mix the spices together.

2. Place some olive oil into the pan.
3. Using a knife, shave the corn off the cob onto a large pan.
4. Cut habanero pepper into little pieces. Throw into with corn.
5. Cook corn until brown-ish.
6. Add sliced tomatoes and seasoning and let it char. Turn off heat. 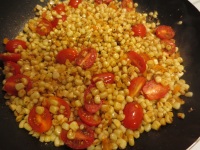 7. Heat tortillas on small pans, and place cheese on it. Once cheese melts, place some corn on one of them.
8. Place the other tortilla with cheese onto the other one. Smack together and slice!

9. Serve with sour cream (or greek yogurt like I did). 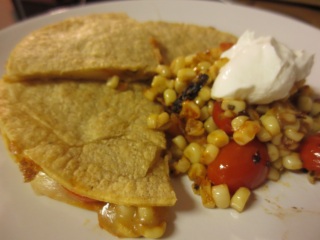