Words cannot describe how excited I am to share this recipe!!! I am so in love with this cauliflower “alfredo”!!!!!!! I literally lick my bowl and spoon every time I eat it – yes, it is THAT good!!! I think it’s the perfect creamy to satisfy the “cream” texture that usually is made true by cream and butter. Cauliflower is seriously my new favorite veggie and it is so versatile. I can’t believe I am just gobbling down cauliflower – shame on me for hating it when I was a kid! But omg I can’t believe cauliflower can be made into vegan pasta sauces, cauliflower rice, Raw Cauliflower Tabbouleh, and creamy vegan soups!!! I can’t wait to try more things with this beautiful vegetable!!! You can serve this creamy cauliflower with traditional things too like in place of starchy mashed potatoes or serve it as a creamy sauce with anything and everything. Trust me it is super duper good. I will be making this obsessively from now on. Okay, enough with my raving – here it is!!!

END_OF_DOCUMENT_TOKEN_TO_BE_REPLACED 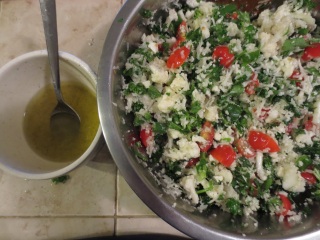 Following my cleanse, I made this raw cauliflower tabbouleh to ease back into my normal routine off the juices. LOL this ‘healthiness’ didnt last very long when I had ramen and my gluten free brownies later that day. Along with a weekend filled with alcohol and good food (including McDonalds breakfast and fries). I did counter those things with a 10 mile roundtrip hike in Azusa though! It is called the Bridge to Nowhere Hike! If anyone is interested, make sure you get a $5 Day Pass at the General Store in the little town you pass by before you get to the trail head parking area. Also, parking is difficult (took us an hour and still ended up parking a 1/2 mile away from the trail head). So arrive early (like 8am early) or come by at 12pm when others are leaving from the morning run. You trek through rivers walking on logs and walk on lots of rocks. However, it is a moderate hike, and only very little parts were incline. There isn’t a clear trail, but there are tons of people hiking it so just follow them or shout at the gold miners in the rivers for help of where the trails continue. I enjoyed it so much! It is pretty scenic all the way and you reach the Bridge to Nowhere where you can bungee jump! I did not partake in the bungee jump but it is pretty cool that you have to hike all the way there to do it. My legs are still aching from Sunday so it is a pretty good workout. Took me 5 hours to complete the entire hike to and back so you will get a good workout and burn some calories :). There are parts that had shade, but mostly it was pretty sunny so bring lots of water- I brought 3 bottles 🙂 Check it out and let me know how you liked it! Also, I am so crazy – I drove back from LA that same night and went to Bassmnt to see Dash Berlin and danced the night away so I had an incredible weekend!

Because of all the junk and the good food and alcohol I drank, I made this tabbouleh for the 2nd time this week. So addicted.

END_OF_DOCUMENT_TOKEN_TO_BE_REPLACED

I don’t like 99% of cheeses out there. I only like the ones with extremely mild in taste like cheddar, mozz, muenster, and occasionally gouda. Not a brie fan or feta fan. And the other numerous stinky cheeses out there! Lately I have been interested in the vegan diet, and vegan recipes. I like to eat healthy, with lots of veggies incorporated in my diet, so naturally I was curious of vegan-ism. I have absolutely no intentions to become vegan, but some of the stuff that they create are astounding and delicious. Vegans don’t eat cheese, so I’m curious to try vegan cheeses because I know the cheeses they make have the look and feel of it, but it may not taste exactly like regular cheese. This intrigues me because I can add substance and aesthetics to things that require cheese, but the dish doesn’t have to taste like it. I ran across this Vegan Parmesan Cheese on the blog Oh She Glows and decided to give it a try. It definitely doesn’t come close to tasting or smelling like parmesan cheese, but it gives my pasta (or anything) the added fluff and great nutrition. Plus, I don’t have to feel guilty eating it!!! Vegan cheeses, and vegan dishes that require a cheesy flavor, use this thing called nutritional yeast. Nutritional yeast contains B12 vitamins (which plant foods do not have) that a lot of vegans lack if they don’t take supplements for it. I buy it at the OB People’s Market where they have bins of it- I use the regular nutritional yeast and isn’t expensive.

END_OF_DOCUMENT_TOKEN_TO_BE_REPLACED

Fall into Fall with this veggie soup! Its packed with vegetables and fiber, and has that yummy butternut squash flavor to it. Its vegetarian too if you use veggie broth! Its so healthy, but tastes so good that I was obsessed over it for a week!!!